Opal displays rainbow-like hues that have been prized for thousands of years . In the 1960s a team of Australian scientists analysed Opals with an electron microscope and discovered that small spheres of silica gel cause "interference and refraction manifestations". These spheres act on the light that passes through the gemstone and create the rainbow of colors that we see.

Almost ninety-five per cent of all fine opals come from the dry and remote outback deserts of Australia. Opals are often cut in cabochon, a rounded half-circle form, to best display their fire. The exceptions to this rule are the highly prized fire opals mined in Mexico, which have a warm, beautiful transparent red or golden color. Fire opals are sold in more traditional, faceted gemstone cuts and conventional settings.

Opals Love to be Worn
Opals always contain water – usually between 2 and 6 per cent, but sometimes even more. If stored too dry or exposed to heat over a period of time, Opals will show fissures and the play of colour will become paler. Therefore, Opal jewelry should be worn as often as possible, for then the gemstone will receive the needed humidity from the air and from the skin of its wearer.

Opal as a gift. 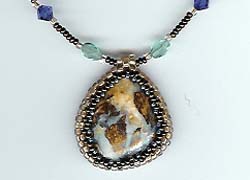 This photo is a boulder opal a friend of mine brought back from Australia. I created a beaded bezel for it using peyote stitch and seed beads. The necklace is strung seed beads, Swarovski crystal and Czech glass beads. I love how the pattern on this side of the opal is reminiscent of a waterfall.

If you've created anything using Opals, feel free to leave a link to it here.

Posted by Unknown at Wednesday, October 07, 2009 10 comments: Links to this post

Save the Bead Museum

We are in the process of a $200,000 sustainability campaign but need to raise $100,000 of that goal by April 30th. This funding is needed to allow
us time so that we can continue our fund development plan to insure the long
term financial health of the Museum. Read more about what The Bead Museum offers and their situation on The Bead Museum's website.

Interweave has decided to help by making it easy and quick for everyone to make a $5 donation to help keep the museum doors open. It's just 5 bucks, the cost of a Starbucks coffee. I'm unemployed and I did it. You can too. Donate now.

How To Make a Delica Color Sample Book

Finally finished all my Delica color cards and bound them together into a book. I wanted my book to be small enough to fit in my purse or carry around when shopping at a bead show, so I chose to make it 1/4 of the size of a sheet of paper. It was really easy to do. The binding is reinforced so that the pages won't rip out from use. The book itself is just an old photo album I had lying around. I should have typed in all the Delica numbers but I couldn't wait to play with the beads, so I wrote the numbers in as I went instead. Since I do not have all the Delica colors, I just used the ones I do have. Now I have a Delica Sample Book I can refer to when creating patterns. I can also take it with me to bead shows to help me know if I already have the irresistible color I'm about to buy. Instructions are below the picture.

Receiving a gemstone gift often has a poetic, special significance which can be even more special when that stone relates to the month in which you were born. For those of you born in April it would seem you are destined to be rich, for your gemstone is none other than the Diamond!

What is a Diamond? 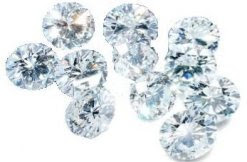 Diamond is the ultimate gemstone, having few weaknesses and many strengths. The ancient Greeks believed that diamonds were splinters of stars fallen to earth. It was even said by some that they were the tears of the Gods or perhaps crystallized lighting or hardened dew drops. In addition, the fact that white light is composed of all colors convinced the ancients that the diamond, the gem of light akin to the sun, was a combination of all the other precious stones.

The name Diamond comes from the Greek word adamas, meaning unconquerable, is a reference to its hardness. It is well known that Diamonds are the hardest substance found in nature, but few people realize that Diamonds are four times harder than the next hardest natural mineral, corundum (sapphire and ruby). Only another Diamond is capable of polishing a Diamond. Diamonds range in color, the majority having yellowish tinges. Diamonds also form in the rest of the colours of the rainbow, with the rarest being red then green, purple, blue. No two diamonds are the same. A diamond's most distinguishing characteristics are its inclusions or marks that are often invisible to the naked eye. A diamond's clarity is determined by the presence or absence of these inclusions, with fewer being better. The greater a diamond's clarity, the greater its brilliance and value. Diamonds began being 'cut' in the sixteenth century to improve their optical effects. Diamonds are a polymorph of the element carbon found in Africa, India, Brazil, Russia, Australia, and the United States of America.


A diamond, if not forever and a girl's best friend, is still for love. It is the most popular gemstone for engagement rings, and also the gem for both the 10th and 60th marriage anniversaries. It was said that Cupid’s arrows were tipped with diamonds which have a magic that nothing else can ever quite equal. For centuries the diamond has had the unique status of being the ultimate gift of love. In 1477, Archduke Maximillian of Austria gave a diamond ring to Mary of Burgundy, beginning the tradition of diamond engagement rings. And the reason a woman wears it on the third finger of her left hand dates back to the early Egyptian belief that the vena amoris, the vein of love, ran directly from the heart to the top of the third finger on the left hand.

An old English ballad tells of the romance of a beautiful princess who gave her suitor a ring set with seven diamonds as a memento on his departure for a sea journey. Some distance from home, he observed that the diamonds had turned pale. He saw this as a sign that the princess had found a new love. He hurried back just in time to prevent her marriage to another. Need we add...they lived happily ever after.

Diamonds in History and Religion

In ancient times only kings wore diamonds as a symbol of strength, courage, and invincibility. In the Talmud, a gem supposed to have been the diamond was worn by the high priest and served to show the guilt or innocence of one accused of any crime. If the accused were guilty, the stone was supposed to turn dim; if innocent, it shone more brilliantly than ever. The Hindus classified diamonds and rubies according to four castes. The Brahman diamond meant power, riches, friends and good luck; the Kshatriya diamond was reputed to prevent the onset of old age; the Vaisya stone was supposed to bring success; and the Sudra was supposed to bring all manner of good fortune.

This is the section where I tell all the fun little things about the gemstone that some people believe and some people do not. Wow, there's quite a few for the Diamond! Perhaps because ancient people believed diamonds were the combination of all the other precious stones they added all the other stone lore to that of the diamond? Whatever the reason, the diamond seems to be the ultimate super gem (perhaps even the source of superhero powers ). Here's a few highlights:

A symbol of purity, diamonds unite relationships by bringing love and clarity into a partnership. Like the emerald, the diamond was said to be a reliable test for fidelity. A stone placed on the breast of a sleeping lover was expected to make him tell all. Alternately, to rest a diamond on a wife's head without her knowledge while she slept. If she was faithful, she would turn to her husband in her sleep; if not, she would move away.

The hardness and durability of the diamond protects its wearer from evil. A diamond is believed to represent peace, innocence, fidelity and serenity and purity. It has always been associated with strength and good luck. Diamonds bring power, riches, success, friends, everlasting youth and the promise of serenity and contentment. For the insomniacs among us, a diamond gives calm sleep and takes away nightmares.

Here's my favorite, soldiers believed that a diamond carried into battle would keep them safe from harm and even render them invisible. And perhaps the most useful for today's lifestyle, a large diamond is an ideal tool to block against geopathic or electromagnetic stress which can come from cell phones. But remember, according to ancient lore the magical powers of a diamond only work if the gem has been freely given.

Email ThisBlogThis!Share to TwitterShare to FacebookShare to Pinterest
Labels: Gemstones

Update On My Beading Endeavors

Just a quick update on what I've been up to lately with my beads.

If you feel so inspired, go ahead and comment here on the projects you are working on. Links welcome :)